Chemical fires, explosions and toxic releases are shockingly common in the US. Communities of color and low-income communities are most at risk.

Across the United States, over 12,000 high-risk chemical facilities put 39% of the US population (124 million people) who live within three miles of these sites at constant risk of a chemical disaster. The full vulnerability zones for these industrial and commercial sites can extend up to twenty-five miles in radius. Many communities of color and low-income communities face disproportionate risk from these facilities, and often face other health hazards as well, such as high levels of toxic pollution, and higher rates of hospitalization and mortality from COVID-19.

But commonsense solutions exist that can prevent chemical disasters and protect workers and communities at the fenceline.

The EPA’s Risk Management Plan (RMP) Rule regulates these 12,000 high-risk chemical facilities nationwide and is currently being updated. Coming Clean and the Environmental Justice Health Alliance for Chemical Policy Reform (EJHA) are mobilizing a broad coalition of stakeholders to demand a stronger rule that will protect workers and communities, and prevent chemical disasters.

"For decades our constituents have lived under the constant threat of explosions or toxic releases in our neighborhoods, never knowing what or when the next disaster will be... This week we joined more than 70 elected officials from 16 states and territories nationwide in writing a letter to EPA Administrator Michael Regan urging him to place disaster prevention and environmental justice at the center of an updated rule." 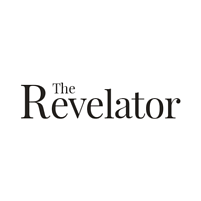 It's time to stop rolling the dice on chemical disasters

"Have you ever watched somebody shake a can of soda, and then get ready to crack open the top? You know it’s going to explode, but you don’t know when, or how bad it will be. That’s what it’s like living near a chemical plant. Except the consequences can be deadly. As a lifelong resident of Kanawha County, West Virginia — an area that has been home to dozens of industrial facilities making everything from pesticides to plastics — I know this uncertain feeling all too well."

How close do you live to hazardous RMP facilities?

Explore interactive maps to find out. 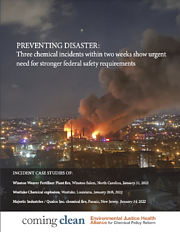 The report offers actionable recommendations the EPA should include in its final RMP rule that could prevent similar incidents from happening in the future, including:

Watch: Life at the Fenceline

Acrid smoke filling barely breathable air. School buildings shaking as students and teachers sheltered in place. First responders fighting fires over multiple days, and at a disadvantage due to the hazardous chemicals present. This was just some of the havoc wrought by three dangerous incidents at chemical facilities that occurred within a two-week span in January 2022, all of which caused significant harm to workers and communities. A timely joint report by Coming Clean and the Environmental Justice Health Alliance for Chemical Policy Reform (EJHA) analyzes these incidents and uses them as a lens to address the adequacy of the Risk Management Plan (RMP) rule, the U.S. Environmental Protection Agency’s (EPA) primary regulation intended to prevent chemical disasters. And, as EPA has recently proposed revisions to the RMP rule, Coming Clean and EJHA identify where EPA needs to do better in order to achieve its stated goal: protecting communities and advancing environmental justice.

Maya Nye felt the boom that changed her life from a mile away. Then a fire truck went down her one-way street announcing that a shelter-in-place order had taken effect and to shut all doors and windows. Nye, then 16, sheltered in place like she had been taught in school, but the duct tape she put up to cover the cracks around the door and windows didn’t work. The smell infiltrated her house. An explosion at the Institute chemical plant then owned by former French chemical company Rhône-Poulenc killed one worker and injured two others who were in a unit for the insecticide methomyl. It was Aug. 18, 1993 — nearly nine years after a leak of highly toxic methyl isocyanate from a Union Carbide pesticide plant in Bhopal, India, killed thousands of people and caused permanent disabilities or premature death for many thousands more. “My life was forever changed,” recalled Nye, who became a chemical safety advocate and is now federal policy director for Coming Clean, a chemical industry-focused environmental health nonprofit. Read More

Despite housing millions of pounds of hazardous chemicals, the Passaic chlorine plant that was almost engulfed in a massive fire earlier this year was not required to register its stockpile with the federal government or develop a special safety plan, according to a report released Tuesday by a watchdog group. The Qualco chlorine plant falls outside the purview of the Environmental Protection Agency's Risk Management Plan and its most recent revisions designed to prevent chemical disasters like the one that nearly unfolded in January. "A stronger rule is needed to ensure that hazards are removed, or we will continue to see more chemical disasters," said Steve Taylor, a director at Coming Clean, an environmental nonprofit group based in Vermont. Elias Rodriguez, an EPA spokesman, confirmed that Qualco is not in the EPA's program because it "does not meet threshold quantities of RMP-regulated substances." Read More

(KPLC News) Some think more needs to be done to reduce risk from chemical leaks and explosions from industries. The explosion at Westlake Chemical in January is one of three featured in a report profiling explosions and safety measures that authors said EPA can require right now to prevent future chemical disasters. Authors of the report wrote six workers were injured and 7,000 students in a dozen schools had to shelter in place. Steve Taylor said their report includes three case studies of serious chemical incidents, including Westlake. “That happened within two weeks of each other, in January of this year, and each of those incidents and the failures that led up to them provides important insights for how EPA needs to strengthen this rule to prevent chemical disasters,” Taylor said. Read More

A new report points to a chemical explosion in Louisiana this year as a prime example of why the federal government should toughen national safety standards at petrochemical plants. The Jan. 26 blast that injured six workers at Westlake Corp.’s Lake Charles South complex and forced thousands of students to shelter at their schools was one of three chemical incidents highlighted in the report, produced by Coming Clean and the Environmental Justice Health Alliance for Chemical Policy Reform. Read More

EPA is relying too much on voluntary industry actions to address the risks certain chemical facilities pose to the public, advocates say in a scathing new report that pushes for changes to a draft rule. Two coalitions composed of environmental justice groups, Coming Clean and the Environmental Justice Health Alliance for Chemical Policy Reform, in a report released Tuesday say that while EPA is seeking regulatory revisions to address the risks, more must be done. The groups lay out specific recommendations and point to recent chemical disasters in pressuring the agency for changes to its approach. Industrial and commercial facilities storing highly hazardous chemicals, the groups argue, "disproportionately endanger communities of color and low-income communities." Those areas, they continue, "also often experience disproportionate levels of toxic air pollution and other health and environmental hazards." Read More

Report: Explosive from Weaver fire could destroy a community but EPA looks the other way

While conceding that “incidents involving ammonium nitrate may be among the most severe and highest-profile accidental releases both in the United States and around the world,” the Environmental Protection Agency proposes leaving the highly explosive chemical unregulated as it updates rules covering the storage of hazardous substances. In a report to be released Tuesday, a pair of national environmental organizations points to the Jan. 31 Winston Weaver Co. fire as clear evidence that the EPA’s approach puts lives and communities at grave risk. “Companies should be required to disclose the presence of ammonium nitrate at their facilities and have approved risk management plans in place to protect workers and surrounding communities,” Coming Clean and the Environmental Justice Health Alliance for Chemical Policy Reform note in their 19-page report.

Today, Coming Clean and the Environmental Justice Health Alliance for Chemical Policy Reform released a report that profiles three chemical incidents that occurred within two weeks this January, and recommends specific safety measures that the Environmental Protection Agency (EPA) should require in order to prevent future chemical disasters. Preventing Disaster offers actionable recommendations the EPA should include in its final rule that could prevent similar incidents from happening in the future, including: requiring all RMP facilities to consider, document, and implement safer chemicals and technologies; expanding the Risk Management Program to cover ammonium nitrate and other hazardous chemicals which remain excluded in the proposed rule; requiring RMP facilities to not only consider the risks posed by natural hazards, as proposed in the draft rule, but to take meaningful steps to prepare for those risks, such as implementing backup power for chemical production and storage processes. Read More

Today, Coming Clean and the Environmental Justice Health Alliance for Chemical Policy Reform (EJHA) released a report that profiles three chemical incidents that occurred within two weeks this January, and recommends specific safety measures that the Environmental Protection Agency (EPA) should require in order to prevent future chemical disasters.  On January 14, 2022, a fire at a warehouse in Passaic, New Jersey came dangerously close to igniting the adjacent Qualco Inc. facility where an estimated 3 million pounds of hazardous chemicals were stored. According to fire officials, this could have caused “one of the most catastrophic chemical disasters in the region in recent history.” Facilities like Qualco Inc. are not currently covered by the EPA’s Risk Management Program despite storing large chemical stockpiles. The facility was therefore not required under the RMP rule to report the hazardous chemicals on site to EPA, conduct a worst-case release scenario analysis, coordinate incident planning with local first responders, or consider measures to prevent a chemical disaster. Read More

On January 31, 2022, a fire at the Winston Weaver Fertilizer plant in Winston-Salem North Carolina caused 6,500 people to evacuate, emitted unsafe levels of air pollution, and nearly triggered a deadly ammonium nitrate explosion.  Ammonium nitrate is not currently covered under the RMP rule, and EPA’s newly proposed changes do not expand the Program to cover any new chemicals, ignoring the recommendations of the U.S. Chemical Safety Board and the National Fire Protection Association. Read More