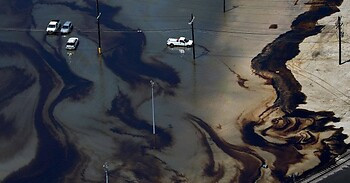 WASHINGTON – The Environmental Protection Agency made clear today that it will continue ignoring its responsibility to curtail chemical spills from industrial facilities, a decision that is in blatant disregard of the Clean Water Act and a settlement the agency agreed to in court.

The following is a comment from Michele Roberts, National Co-Coordinator at the Environmental Justice Health Alliance (EJHA):

“For many decades now, black, brown and poor communities, who often suffer first and worst from toxic chemical spills, have been abandoned by federal regulators. While we continue to deal with toxic floodwaters and contaminated soil, the Trump administration simply flaunts its duty to keep toxic chemicals out of our drinking water. This reckless neglect should end now.”

The following is a comment from Pam Nixon, President of People Concerned About Chemical Safety (PCACS):

“I know what it’s like to wonder if my water is safe to drink. In my town of Charleston, W.V, 300,000 people lost access to safe drinking water for weeks after 10,000 gallons of a coal processing chemical leaked into the Elk River. Other communities face similar risks. The EPA should prevent toxic chemical spills from getting into people’s drinking water, but instead it’s ignoring the problem.”

The following is a comment from Erik Olson, senior director for health and food at the Natural Resources Defense Council (NRDC):

“The Trump administration is – yet again – giving polluters a free pass at the expense of people who live near industrial sites that pollute lakes, streams and rivers. Toxic chemical spills pose an unnecessary risk to poor and disadvantaged communities who rely on these water bodies for their drinking water. We intend to continue fighting to ensure EPA issues regulations to prevent spills, as Congress ordered it to do more than 45 years ago.”

Congress required those regulations in 1972, but EPA has failed to issue them. EJHA, PCACS, and NRDC sued EPA in 2015 over its decades-long failure to act. In 2016, EPA agreed in a court-ordered settlement to finalize spill-prevention regulations by this summer. The agency has now announced its plan to continue shirking its duty to regulate to prevent chemical spills.

There are thousands of hazardous substance spills from industrial facilities each year. Low-income communities and communities of color face the greatest risks from these spills as facilities that manufacture, store, and use hazardous substances tend to cluster near those areas. EJHA documented the disproportionate risk that environmental justice communities face from cumulative health hazards, including chemical disasters, in its 2018 report, Life at the Fenceline: Understanding Cumulative Health Hazards in Environmental Justice Communities.

The Natural Resources Defense Council (NRDC) is an international nonprofit environmental organization with more than 3 million members and online activists. Since 1970, our lawyers, scientists, and other environmental specialists have worked to protect the world's natural resources, public health, and the environment. NRDC has offices in New York City, Washington, D.C., Los Angeles, San Francisco, Chicago, Bozeman, MT, and Beijing. Visit us at www.nrdc.org and follow us on Twitter @NRDC.​

The Environmental Justice Health Alliance (EJHA) is a national network of communities of color, Indigenous communities, and low-income communities that are disproportionately impacted by toxic chemical hazards. EJHA works to address the multiple harms caused by the hazardous chemical and energy industries — including waste, pollution, and health hazards — and support community-based solutions that improve health and well-being. Visit us at www.Ej4All.org.

People Concerned About Chemical Safety (PCACS), located in Charleston, West Virginia, is the corporate successor to People Concerned About MIC.  PCACS serves as grassroots watchdogs to ensure existing environmental laws are enforced by government regulators at facilities in our communities.  We advocate for human rights relating to the environment and chemical safety through education; and promote environmental justice for vulnerable populations being disproportionately impacted by toxic and hazardous chemicals. Visit us at http://peopleconcernedaboutmic.com/.