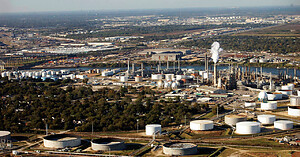 Houston, TX – The aftermath of a horrific fire at the ITC chemical plant in Houston has reinforced ongoing oversight and enforcement gaps, according to a coalition of groups that filed suit last week in federal court to force the chemical industry to undertake “worst-case scenario” planning.

“In Houston, we've seen disaster after disaster and things still aren't getting better. The situation shows that the regulatory agencies charged with protecting community health in the area are far too focused on the needs of industry and doing too little to protect our families,” said Juan Parras, Executive Director of the Texas Environmental Justice Advocacy Services (TEJAS).

The fires at ITC damaged a dike which allowed unidentified chemicals (including reports of the carcinogen benzene) to spill into the Houston Shipping Channel, forcing closure of the busy waterway that some estimates say will cost the region’s economy $1 billion. The Environmental Justice Health Alliance, of which TEJAS is an affiliate, Clean Water Action, and Natural Resources Defense Council (NRDC) sued the Environmental Protection Agency (EPA) for its failure to pass regulations requiring the most dangerous chemical facilities to develop plans to prevent and respond to worst-case scenario spills of hazardous substances. The Clean Water Act suit is focused on situations similar to the Shipping Channel spill.

“That suit looks prescient in light of the fire and chemical spill in Houston,” says Kaitlin Morrison with NRDC. “The Trump Administration had a chance to head off situations like these. The situation in the shipping channel shows how dangerous these spills can be—threatening millions of people and freezing critical economic activity. If the feds do not see why these rules need to change, we think the courts will.”

The state legislature and Governor of Texas recently passed a bill restricting cities and counties from monitoring pollution and taking action to protect public health. These efforts have been especially notable in Harris County, which had been more aggressively tackling this problem on behalf of Houston’s residents until the state government intervened. The Texas Commission on Environmental Quality and EPA region 6 recently turned down a state-of-the-art pollution monitoring service from NASA.

“TEJAS has been involved in a number of national lawsuits trying to protect the people of Houston. If the state and EPA are not willing or able to do the needed work of protecting the public and sharing data on the toxins released in our community, this latest suit becomes all the more important—the chemical industry needs to plan for the worst possible outcomes. The ITC disaster shows that is not happening, so we hope the courts will step in,” said Juan Parras.

More on last week’s suit, which would force EPA to issue decades-overdue rules requiring plans for prevention and response to chemical spills like this one, at https://www.nrdc.org/media/2019/190321-0.