Nearly 40% of Americans Live in Constant Risk of Catastrophic Explosion or Poison Gas Exposure - People of Color, the Poor, Schools, and Medical Facilities at Even Greater Risk

Washington, D.C. – A new interactive map and report, titled, Life at the Fenceline, shows that people living within a three-mile 'fenceline' zone of hazardous chemical facilities are disproportionately people of color, impoverished, and suffer a greater risk of cancer and respiratory illness caused by air pollution. The mapping and analysis found that over 124 million Americans (39%) live in constant threat of catastrophic explosion or poison gas release within a fenceline zone of one or more hazardous chemical facilities. The analysis also found that 24 million children attend 125,000 schools (45%) and 11,000 medical facilities (39%) are vulnerable to chemical disasters within fenceline zones. 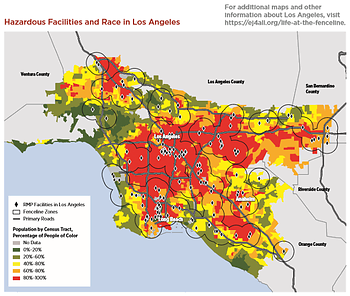 The mapping and analysis, released by the Environmental Justice Health Alliance (EJHA), also looked more closely at nine 'environmental justice' communities and found the risk of disease caused by air pollution in fenceline zones increases still further in federally-designated areas of low access to healthy food. The percentage of Blacks or Latinos living within 3 miles of an RMP facility was higher than for the entire area in every study area, and often much higher than for the US as a whole. The study also found that nearly half of all national dollar store chain locations are near hazardous chemical facilities. Today, in many of these communities, dollar stores are the only nearby sources for food, emergency supplies, and household goods.

Michele Roberts, National Co-Coordinator of the Environmental Justice Health Alliance, said, "This study helps to reinforce and prove what many living in environmental justice communities already know: chemical companies are being permitted to disproportionately risk our safety, pollute our air, and damage our health--and they're doing it to people of color and the poor at rates greater than the average American. It's way past time to address the fundamental injustice and environmental racism of who's backyard dangerous and polluting facilities and the waste they generate ends up in."

The map and report conducted an in-depth analysis of demographics, income, home values, and other environmental justice concerns in nine communities: 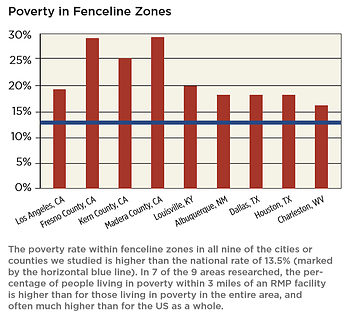 EJHA and the groups involved in this report are calling for greater protection from hazardous chemical facilities and proactive rules designed to prevent chemical disasters. This research and mapping work is designed to expand on previous demographic research in chemical facility disaster zones by EJHA, titled, Who's in Danger. EJHA will be expanding the interactive online map by adding additional demographic layers and analyzing new communities in the future.