November 15, 2018Blog: Fighting for Chemical Security - Raising Our Voices for Health & Justice for People at the Fenceline

This post originally appeared at Women’s Voices for the Earth on October 23, 2018

Imagine being woken up early in the morning by a siren blaring loudly. You turn on the news to learn that there is a massive fire at the oil refinery in town. Residents are instructed to “shelter in place,” so you make sure all the windows are closed, but you know there is not much more you can do. You realize that your 8-year-old child is having a very hard time breathing, so you head to the hospital as soon as you can. It turns out that sulfuric acid and nitrogen dioxide gases were released from the refinery because of the fire.

This actually happened in Richmond, California, in August 2012. Chemical disasters like this have been caused by facility mismanagement, but hurricanes and other extreme weather events caused by climate change threaten to make major releases of hazardous chemicals a more common occurrence. Three weeks ago, the report Life at the Fenceline: Understanding Cumulative Health Hazards in Environmental Justice Communities was issued by the Environmental Justice Health Alliance for Chemical Security, Coming Clean, and the Campaign for Healthier Solutions. The report looks at how living near hazardous chemical facilities can be exacerbated by everyday exposures to air pollution and also lack of access to healthy foods and products. Not surprisingly, it’s predominantly communities of color and low-income communities that bear the brunt of these issues.[1]

We often provide tips and solutions for reducing toxic exposures from everyday products, including switching to safer products. But this isn’t possible for many EJ communities that also have low access to stores selling safer and healthier options. Discount retail stores (or dollar stores) abound in EJ communities, and recent product testing showed that dollar store products from children’s jewelry to silly straws tested positive for toxic chemicals and/or heavy metals.[2]

Life at the Fenceline looks at the intersection of race, poverty, vulnerability to chemical disasters, health risks from ongoing air pollution, and access to healthy product and food access. Focusing on 9 communities across the U.S., the report also looks at schools and medical facilities located in “fenceline zones” (within 3 miles of an industrial facility storing large quantities of hazardous chemicals).

So what can be done to better protect EJ communities?

The report lays out several recommendations, including preventing the construction of new or expanded chemical facilities near homes and schools. Existing chemical facilities should share hazard information and emergency response plans with communities and workers. Much of this is up to the chemical companies and regulatory agencies. EJ communities have also organized to demand real changes from corporations and governments, so that they have a voice in the development of community-based solutions.

Retailers also have an important role to play. The Campaign for Healthier Solutions has been demanding that dollar store companies like Dollar Tree and Dollar General adopt policies to eliminate hazardous chemicals from the products they sell, and to stock safer products and healthier foods. Recently, the campaign successfully moved Dollar Tree to ask its suppliers to phase out 17 hazardous chemicals by 2020.[3] Life at the Fenceline rightly points out that dollar stores have the opportunity to sell safer and healthier options, and this would greatly benefit the EJ communities where dollar stores are predominantly located. 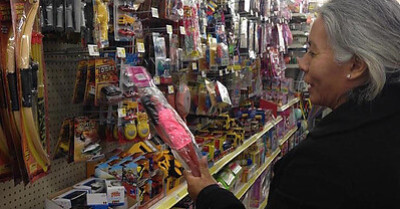 Last year, we published the Health First Roadmap, an online resource for cleaning product companies to select safer chemicals and offer safer products. We are moving for all companies that make cleaning products to adopt the Roadmap to commit to making real changes in their chemical screening process and criteria to truly put our health first. Many of the major cleaning and laundry brands like Downy and Glade are available in dollar stores as well as major retailers like Target and Walgreens. There are also less well known brands like Fabuloso and Totally Awesome sold exclusively at discount retailers. All of these products should be safe for dollar store shoppers, but first cleaning product companies have to put health before profit.

Because of the disproportionate health threats faced by EJ communities, adopting the Health First Roadmap is the very least companies can do. To the person waking up to a major chemical disaster, and whose health may already be negatively impacted by the everyday release of toxic chemicals, the last thing they should have to worry about is whether the chemicals in their spray cleaner might be causing them harm. Unfortunately, companies that make cleaning products do not take all these issues into account when they assess how much of a hazardous chemical they’ve determined is “safe” enough to use in their products. Some companies have identified a list of chemicals they restrict or limit in their products—their Restricted Substances List (RSL). However, few companies make these full lists public, further limiting the amount of critical information communities need to advocate for themselves and their health.

Product manufacturers can do even more to protect EJ communities. They can insist that no hazardous chemicals are used in the manufacturing of their products, even when those chemicals aren’t used in product formulations. This helps protect workers who come in contact with hazardous chemicals, as well as communities where chemical facilities are located. Companies with manufacturing RSLs that restrict hazardous chemicals go even further to show that they care about people’s health. The sad reality is that very few companies that make any kind of product take this sort of approach. What’s worse: even when companies start phasing out certain toxic chemicals, the products that still contain them tend to end up at dollar stores. We must demand they do better!

I hope by now, you are ready to take action. People living in fenceline zones are organizing and demanding accountability from corporations and governments, and they need us to take a stand! Here are a few things you can do to support EJ communities:

[2]A Day Late and a Dollar Short: Discount Retailers are Falling Behind on Safer Chemicals, Campaign for Healthier Solutions, 2015.

[3]A Day Late and a Dollar Short: Discount Retailers are Falling Behind on Safer Chemicals, Campaign for Healthier Solutions, 2015.

This post originally appeared at Women’s Voices for the Earth. Click here to read the original piece.